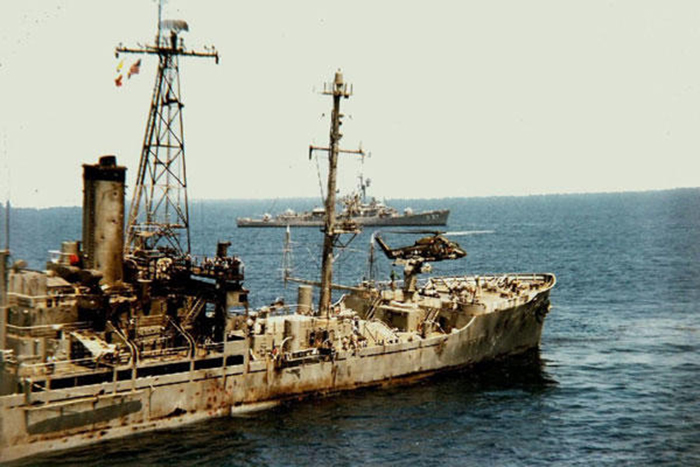 But why did Israeli aircraft attack the USS Liberty in the first place?

After all, this was not a war between the U.S. and Israel, but between Israel and Egypt, Syria, and Jordan.

The short answer is that Israeli forces mistook Liberty for an enemy ship.

Well, a few days before the war began, the USS Liberty was ordered to perform signals intelligence collection in the Mediterranean Sea, near the northern coast of the Sinai Peninsula, which is situated between mainland Egypt and Israel.

When the war erupted, orders commanding Liberty to travel farther from the coasts of Egypt and Israel, where the fighting was taking place, were sent to Liberty via radio to ensure Liberty’s safety.

Unfortunately, Liberty didn’t receive these orders until several hours after the attack, causing it to be a sitting duck in wartime waters. As a result, Israeli forces attacked what they thought was a hostile Egyptian ship, and hundreds of innocent Liberty crew members died or were seriously injured.

The combination of two factors prevented proper radio communications: a series of message routing problems caused by an influx of high-priority communications related to the war, as well as a shortage of skilled radio operators.

In other words, ineffective communications was to blame for this tragedy.

Today, failure of or implementation of ineffective C4ISR, C5ISR, or C6ISR systems and practices could mean tragedy on an even larger scale.

In this blog post, we’ll start by explaining C2, as it is the very foundation of C4ISR, C5ISR, and C6ISR. Then, we’ll tie that essential discussion into a summary of the differences between C4ISR, C5ISR, and C6ISR, providing examples and answering these frequently asked questions in the process: What do they really mean, why are they important, and why do they keep changing? 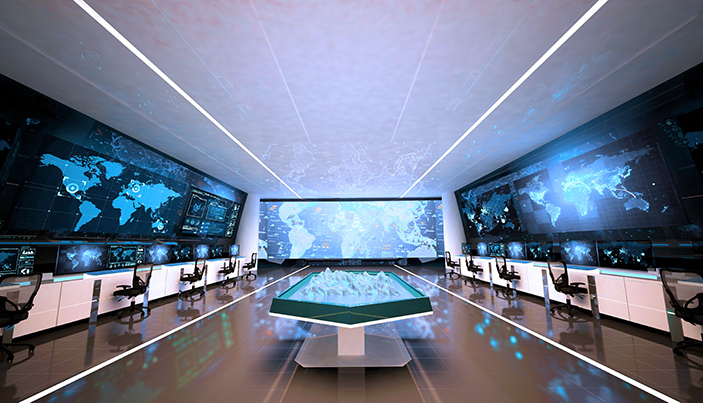 Introduction to command and control (C2)

Every discipline has a plethora of unique words, phrases, and acronyms, sometimes pejoratively known as “jargon,” that make up its writings, teachings, and deliberations.

Command and control (C2), as well as the activities of which it consists, is no different.

C2 is home to a host of similar acronyms that, when frequently used by the U.S. military, intelligence agencies, national security analysts, and others in the defense community, may cause one to wonder:

What are the differences between these concepts, anyway?

One such example is that of C4ISR, C5ISR, and C6ISR. You’ve probably seen these acronyms scattered across various military blogs, military websites, and the websites of defense contractors selling, for example, “C4ISR systems.” You’ve probably also seen them used in various DoD publications or heard DoD officials use them in speeches.

Understanding the differences between C4ISR, C5ISR, and C6ISR is essential to understanding what industry experts mean when they use them in publications, speeches, or collateral. 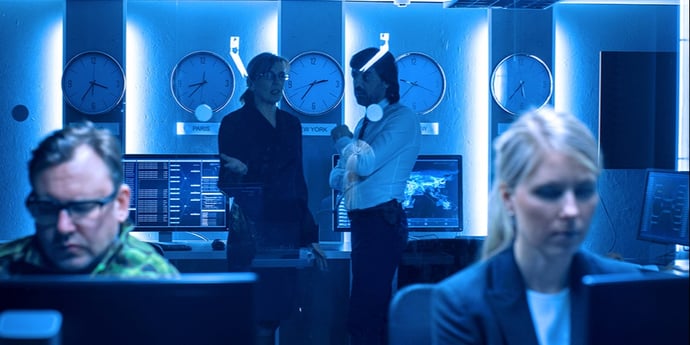 Photo: Command and control involves the execution of a variety of different activities to ensure mission success.

What is command and control (C2)?

Command and control, or C2, is defined by the DoD as “the exercise of authority and direction by a properly designated commander over assigned and attached forces in the accomplishment of the mission.”

“Command” represents the “vested authority that a commander in the military service lawfully exercises over subordinates by virtue of rank or assignment.”

“Control,” on the other hand, comprises “those functions of command involving the composition of subordinate forces, the assignment of tasks, the designation of objectives, and the authoritative direction necessary to accomplish the mission.”

In a nutshell, C2 addresses how military commanders lead the Armed Forces to success through the planning and execution of mission-related activities.

Specifically, command and control is about focusing the efforts of a number of entities (individuals and organizations) and resources, including information, toward the achievement of some task, objective, or goal. 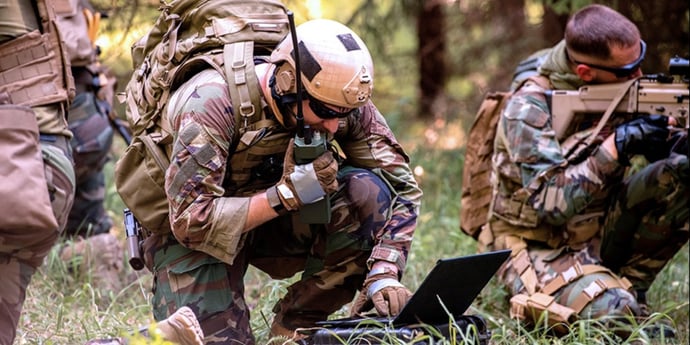 Photo: The C2 process is all about providing commanders with the information they make key decisions that support mission outcomes.

What is the C2 process?

The C2 process is not mysterious, obscure, or new to anyone who has a general knowledge of the history of war or conflict between nations.

The actions of commanding and controlling military forces date back to the ancient beginnings of warfare itself; the U.S. military just has a name for the concept now, C2, that encompasses the planning and execution of these actions.

The C2 process is defined as “making, disseminating, and implementing informed command decisions” to obtain optimum effectiveness of the nation’s military forces in peace time, crisis, conflict, or war.

And these three major areas, in turn, comprise four fundamental functions, which are rather straightforward:

What is the C2 system?

The C2 system is a combination of technologies and practices that informs and supports the C2 processes executed by commanders and members of the Armed Forces.

The main purpose of the C2 system is simple: meet the needs of the commander so that he or she can lead effectively. Contrary to what some might think, the system is focused not only on technology, but on a variety of different variables.

The C2 process and system, in tandem and assuming all components function as expected, combine to form effective C2, defined as the “net result of the successful interaction of a complex architecture that is comprised of people, procedures, and equipment.”

Over the years, as technology has advanced, new disciplines, activities, and practices have been added to the C2 framework, which has given us the terms we frequently use today: C4ISR, C5ISR, and C6ISR. 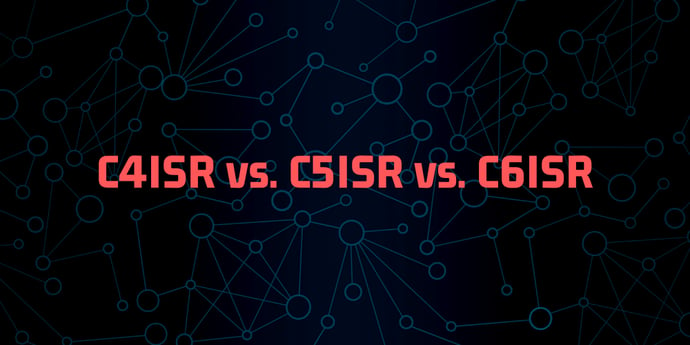 Graphic: C4ISR, C5ISR, and C6ISR are just technological and disciplinary extensions of the core C2 framework.

Now that you understand C2, we can discuss the elements that build upon this framework.

C4ISR, an acronym used often by the U.S. Department of Defense, defense industrial base (DIB), American intelligence agencies, and others in the American defense and intelligence communities, stands for “command, control, communications, computers (C4), intelligence, surveillance, and reconnaissance (ISR).”

The acronym’s four “Cs” represent an extension of the command and control (C2) concept, adding the two “Cs,” “communications” and “computers,” or C4, to account for the implementation of facilities, equipment, personnel, and procedures related to both. The addition of “ISR” accounts for any military intelligence collection activities related to the combination of C4.

Now, we’re adding a fifth and sixth “C” to the command and control (C2) framework.

Essentially, the only real difference between C4ISR, C5ISR, and C6ISR is the addition of facilities, equipment, personnel, and procedures related to computers, cyber-defense, and combat systems, respectively, to the C2 framework. 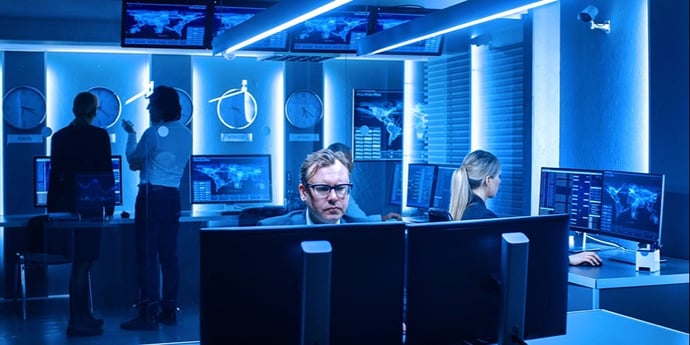 Photo: The best examples of a C4ISR, C5ISR, and C6ISR systems are military command and control facilities.

There is no typical example of a C4ISR, C5ISR, or C6ISR system because any given military system involves a multitude of different facilities, equipment, personnel, and procedures unique to their application, environment, and mission.

Perhaps the best example of a C4ISR/C5ISR/C6ISR system we can provide is a desert-deployed command and control post:

Most DoD publications, officials, and defense contractors use the acronym C4ISR, so if you see C5ISR or C6ISR being used, it’s likely that the writer or speaker wishes to highlight elements of either acronym’s specific addition – “cyber-defense” with C5ISR or “combat systems” with C6ISR, for instance – or indicate that the topic they’re discussing includes subject matter about the facilities, equipment, personnel, and procedures related to the synergy of each discipline or activity.

Why do these acronyms keep changing?

As the military incorporates new and advancing technologies into the C2 framework, it’s likely that we’ll continue to see variations of its associated acronyms.

After all, the C2 system “must be flexible to evolutionary changes enabling it to keep pace with advances in state-of-the-art technology.”

It’s important to understand that, no matter how many new technologies, disciplines, or practices are added to the framework, C2 is the core that holds such advancements together. C4ISR, C5ISR, and C6ISR are just extensions of the foundational tenets of command and control.

Indeed, the basic actions of commanding and controlling a nation’s Armed Forces will likely never change. Only the process and system, ergo, how command and control is executed, will continue to evolve.

Photo: Achieve piece of mind with reliable, trusted technology to that effectively supports your C4ISR, C5ISR, or C6ISR system and helps you achieve mission success.

As we saw with the USS Liberty incident, a failure of a C3 element can cause immense tragedy.

Furthermore, the complex scope of today’s advanced C4ISR, C5ISR, and C6ISR systems, which, in support of joint all-domain command and control (JADC2), utilize various cybersecurity controls, artificial intelligence (AI) capabilities, among other technologies, creates the potential for tragedy on an even larger scale.

That’s why it’s crucial to purchase from trusted hardware and software vendors with a well-established reputation for providing and supporting long-lasting, durable, reliable, and secure equipment for mission-critical C4ISR, C5ISR, and C6ISR systems.

Trenton Systems’ long-life, secure rugged servers and workstations are ideal and are currently deployed in numerous mission-critical C4ISR, C5ISR, and C6ISR systems, with great success. One example of many is Trenton’s support of a propeller-type aircraft program.

For more information about securing a trustworthy, made-in-USA rugged computing solution for your C4ISR, C5ISR, or C6ISR program or application, don’t hesitate to inquire further.