Hold-Down Bars, Brackets, & Retention Bands: What Are They? 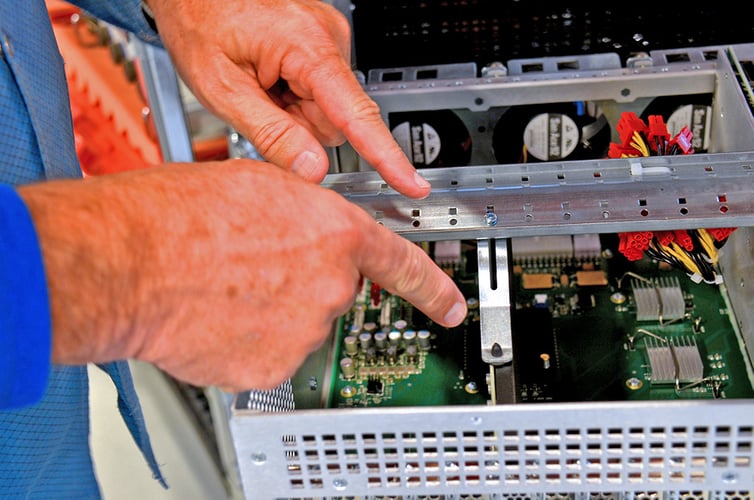 Every worthwhile rugged computing solution has its hardware protections. From FIPS 140-2 SEDs to TPM 2.0 cryptoprocessors, MIL-STD-810 shock and vibe certifications, conformal coatings, sealed chassis, and fanless configurations, a rugged server or workstation usually has one or more of these protections, each of which adds an additional, uniquely important layer of hardware resilience to the system.

These technologies, processes, and designs are some of the more well-known throughout the rugged computing industry and are quite commonplace, but there are three simple hardware protections that are just as commonplace but neither frequently discussed nor recognized for their immense utility: hold-down bars, hold-down brackets, and retention bands.

You can find hold-down bars, brackets, and retention bands in the chassis of many rugged servers and workstations, particularly those operating in high-vibration, high-shock environments. These environments include battlefield-deployed transit cases, aircraft, Navy ships, transport trucks, military ground vehicles, and a host of industrial environments.

Although these simple little hardware protections may seem futile or ineffective due to their size, they’re actually quite instrumental in ensuring that some of your computing solution’s most critical components are safe and secure.

In this blog post, we’ll talk about hold-down bars, brackets, and retention bands, what they are, and why they’re necessary, as well as provide some real-world examples of each. At the end, we’ll discuss whether you should consider asking your rugged computer manufacturer about installing them in your computing solution. 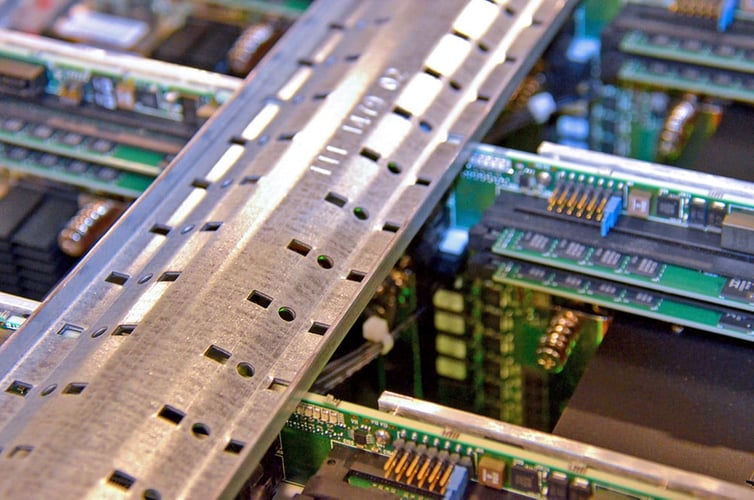 What is a hold-down bar?

A hold-down bar is a thick, rectangular piece of metal horizontally fixed across the top of a server, workstation, or PCIe backplane expansion chassis. The purpose of a hold-down bar is to tightly secure the PCIe expansion cards installed on the system’s motherboard or backplane. It does so via adjustable brackets that extend downward and apply slight pressure.

The bar is concealed by the chassis lid, so you’d probably never know it was in your system unless you were inspecting it for repairs or replacements. The bar can be easily removed, as well as modified with additional brackets using the bar’s series of outer holes on each side. You just screw in a bracket, adjust it based on your PCIe card’s height, lower it onto the card, and you’re done.

Understanding how the hold-down bar works and why it’s there is essential to ensuring the continued physical protection of your system’s expansion cards.

Here at Trenton, we install top-frame hold-down bars, like the one pictured above, in our 1U, 2U, 4U, and 5U servers and workstations. In systems with less height, such as our 2U rugged servers, the bar is installed in the chassis itself instead of across its top, allowing the brackets to push against the cards horizontally. This is a more size-conscious solution for smaller systems in general. 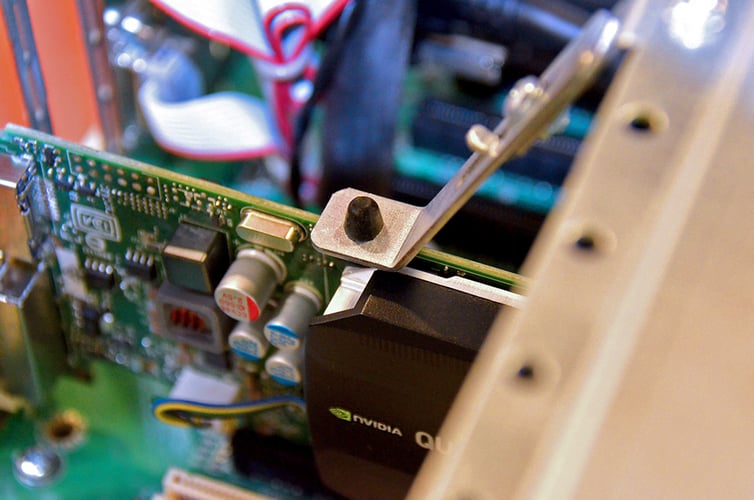 Photo: A hold-down bracket pressed against an NVIDIA Quadro GPU

What is a hold-down bracket?

A hold-down bracket is a rubber-tipped piece of metal – about the size of your index finger – that screws into a hole on the hold-down bar and applies slight pressure to your system’s PCIe cards to keep them in place. This includes your system’s GPUs, USB option cards – any PCIe expansion card you might have. Simply put, the brackets are a source of resistance that push against your PCIe cards to secure them, no different than when you hold down the “Backspace” key on your computer’s keyboard.

We’ve been using the bars and brackets since we started doing systems 12 years ago. They put pressure on the cards and keep them from wiggling around and popping out, and the brackets are adjustable to fit any kind of card.

Either side of a given hold-down bar will typically be lined with numerous holes into which hold-down brackets can be inserted. Since PCIe cards have no standard height, the brackets can be adjusted to touch the card. Hold-down brackets are a great addition to your system if you’re dealing with a lot of PCIe cards of varying heights that may become dislodged during transport or operation.

Hold-down brackets are most often installed in your system prior to shipment. If the customer is in possession of the expansion cards or has a preference to install them himself or herself, a manufacturer may install the bar in the system and send a package of brackets along with it. The same applies for the retention bands.

Like the hold-down bar itself, hold-down brackets are easily removed or replaced. You just simply unscrew them. And thanks to their rubber tips, they won’t cause any damage to or performance issues with your PCIe cards. The brackets are there to do one thing: secure your expansion cards. 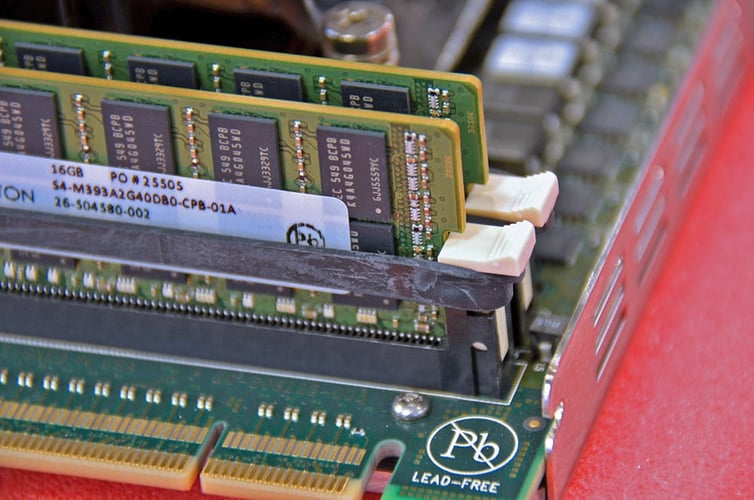 What is a retention band?

A retention band, also known as a DIMM tie-down or simply “tie-down,” is an industrial-grade rubber band circumscribing the ejector tabs that secure a system’s DIMMs. Like the hold-down bar, retention bands secure important system components – in this case, the modules that provide your system with RAM - and prevent your DIMMS from being dislodged or damaged in high-vibration, high-shock environments.

There’s not much to retention bands. They’re just highly elastic bands, but they’re thicker and tougher than the rubber bands you buy at the drugstore or supermarket. In high-vibration, high-shock environments, the ejector tabs keeping the DIMMs in place may become undone, which could cause the DIMMs to flip out of place and become damaged. Retention bands help prevent this from happening by offering a source of constraint to keep the ejector tabs from loosening or unfastening altogether.

At Trenton Systems, we use ethylene propylene diene monomer (EPDM) rubber, a high-density, long-lasting synthetic rubber known for its low electrical conductivity, abrasion resistance, resistance to weathering, and stability in both high and low temperatures. It is used often in the automotive and construction industries and won’t interfere with the DIMMs’ circuits or pins.

Many manufacturers use zip ties to secure the DIMMs, but these are ineffective because they tend to slide down the ejector tabs easily when the system is exposed to vibration and shock. As a result, the DIMMs are no more secure than if they weren't protected with either bands or zip ties. The bottom line: industrial-grade retention bands are the right choice. 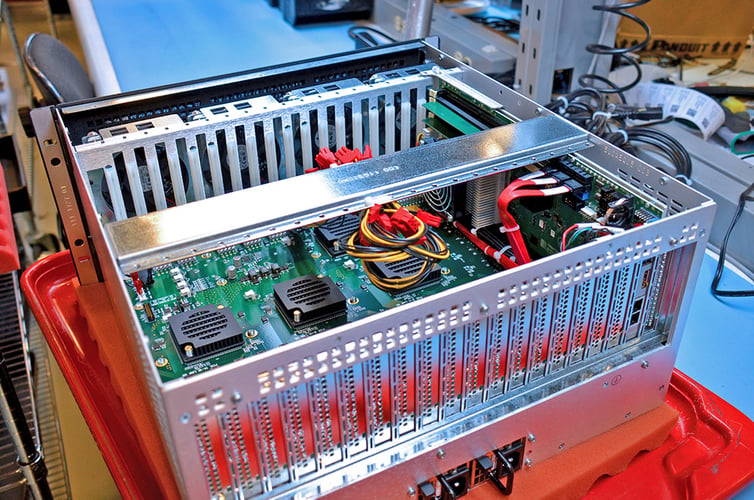 Photo: A 5U rugged workstation with a hold-down bar affixed just above its BPG8032 PCIe backplane and TKL8255 processor board

What are some examples of hold-down bars, brackets, and retention bands in use today?

Hold-down bars, brackets, and retention bands are used in a variety of programs and applications operating in high-vibe, high-shock environments.

One example of a hold-down bar in use today is the bar inside a mobile test and measurement center’s PCIe expansion system. This center is transported onto tarmacs to test aircraft, can be situated on the aircraft itself for testing, and is also used for missile testing as well. Naturally, these environments experience a lot of vibration during takeoff, launch, and flight, but thankfully, the hold-down bar and its brackets prevent the system’s expansion cards from being dislodged and damaged during all three.

One example of retention bands in use today are the bands securing the 12 DIMMs in a 4U rugged server that’s undergoing simple shipping and handling. Indeed, the mere act of transporting and unloading rugged servers and workstations in and from trucks, aircraft, and ships is often coupled with the risk of intense vibrations and shock. Having the 4U server’s DIMMs secured by industrial-grade rubber keeps the DIMMs in place and prevents damage. 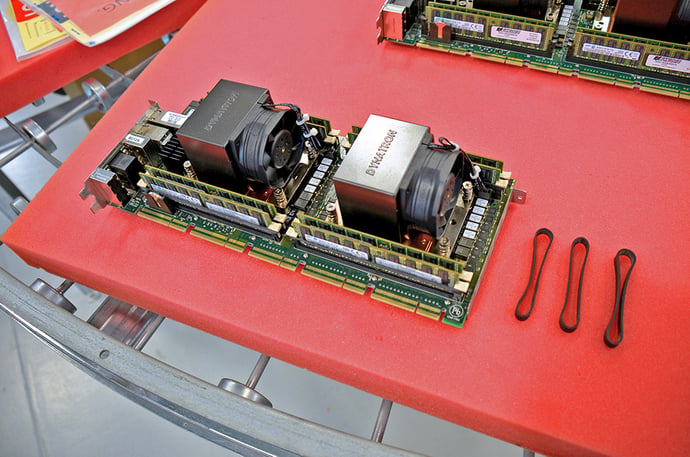 Photo: A dual-CPU processor board with banded DIMMs next to three retention bands

How do I know if I need hold-down bars, retention bands, or brackets?

If your system is headed to a high-vibe, high-shock environment, you'll need hold-down bars, brackets, and retention bands, so check with your manufacturer to see if your system has them. Also, ask the manufacturer about additional hold-down brackets in case you need to add an option card to a PCIe slot later.

The bars, brackets, and bands help immensely with shipping, as well as complementing shock and vibration testing standards like MIL-STD-810 and DO-160. They are very effective and easy to remove in case you need to access your cards, DIMMs, and other system components.

At Trenton, we include hold-down bars and brackets in our 1U, 2U, 4U, and 5U systems, so you generally don’t have to worry about not receiving them. It’s always best practice, though, to double-check and make sure that your system has them equipped, no matter whom you're doing business with. The proper functionality of your option cards and memory depends on it.

The retention bands are included in all Trenton Systems servers, workstations, and PCIe expansion chassis, so your DIMMs will always be secure.

Hold-down bars, brackets, and retention bands are essential in protecting your precious expansion cards and DIMMs in high-vibe, high-shock environments. We'd be happy to assist you with designing a computing solution that incorporates each.