MIL-S-901: Everything You Need to Know

Important Update: The information in this blog post is outdated, as MIL-S-901 has been superseded by MIL-DTL-901E. This blog post will remain live for future reference, however.

Interested in learning about shipboard vibration testing or MIL-STD-810 shock testing? Check out MIL-STD-167-1: Everything You Need to Know and our MIL-STD-810 Shock Testing Overview.

Not for self, but for country.

This phrase is often cited as the unofficial motto of the United States Navy. It imparts a sense of selflessness and nationality among its members, simultaneously reminding them why and whom they serve.

To serve effectively, members of the Navy must be resilient, but so, too, must the tools and equipment they use to get the job done.

MIL-S-901 is one way the U.S. Department of Defense ensures that the Navy has reliable, resilient equipment on the water, during times of both peace and war.

It may be required for certain Navy contracts where servers must continue to function and perform as a result of high-impact shock. A failed mission could put troops in harm's way or even result in death.

From rugged computers to switchboards to power supplies and numerous other shipboard installations, a MIL-S-901 shock testing certification provides a high degree of confidence that the equipment used by Navy sailors, captains, officers and commanders won’t fail them when they need it most.

Graphic: MIL-S-901 is a specification outlining a series of mechanical shock testing requirements for shipboard equipment owned and operated by the U.S. Navy.

According to the specification, the listed shock testing requirements are necessary for any shipboard systems and equipment that are expected to withstand high-impact mechanical shocks inflicted by weaponry.

The purpose of these requirements is to verify the ability of shipboard installations to withstand shock loadings which may be incurred during wartime service due to the effects of nuclear or conventional weapons.

In this blog post, we’ll begin by discussing the three tests associated with MIL-S-901.

The MIL-S-901 lightweight test makes use of a lightweight shock machine and anvil plate. According to the specification, the weight supported by the anvil plate shouldn’t exceed 550 pounds for this test.

Test items in their operational state are attached to the anvil plate of the shock machine using standard mounting fixtures. They are then subjected to three top, back and side hammer blows at hammer heights 1, 3 and 5 – applied parallel to each perpendicular axis.

In total, test items are subjected to nine blows during the MIL-S-901 lightweight test. Operational and post-test damage and functionality are notated, and any necessary changes to the system, if any, are made until the system is able to pass the test. 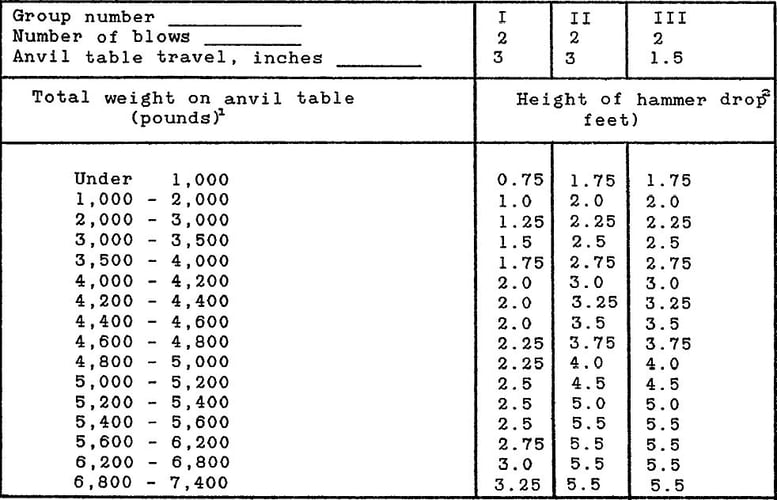 For the MIL-S-901 medium weight test, the weight supported by the medium weight shock machine’s anvil plate shouldn’t exceed 7,400 pounds, according to the specification.

Test items in their operational state are mounted and subjected to a minimum of six hammer blows, segmented into two rounds of three blows each.

Operational and post-test damage and functionality are notated, and any necessary changes to the system, if any, are made until the system is able to pass the test.

The MIL-S-901 heavyweight test, also known as the barge test, is perhaps the most well-known test in MIL-S-901, mainly because it involves setting off explosive charges near a standard or large floating shock platform (FSP) that houses the item or equipment being tested.

Pretty cool, right? We think so, too.

Table: The MIL-S-901 test schedule for heavyweight shock testing, specifying the test conditions, explosive charge depth and weight, shot direction and standoff distance based on the type of floating platform used during testing.

The MIL-S-901 heavyweight test consists of four shots in total. Additional shots may be required, depending on the specifications or contractor’s preference.

MIL-S-901 states that the explosive charges used during barge testing are located anywhere from 20-110 feet from the near side of the floating shock platform (FSP) and detonated in both the fore-and-aft and athwartship directions.

Our engineers design our processor boards and chassis from the ground up to withstand the most harsh shock and vibe tests, including MIL-S-901D.

Contact us today to learn more about the compliance testing standards we support.

MIL-S-901 splits test items and equipment into two categories: Grade A and Grade B.

Although they’re referred to as shock grades in the specification, the categories don’t include or specify shock pulse measurements. They’re more so used to determine the essentiality of the equipment as it relates to a ship’s operation.

Grade A items are items which are essential to the safety and continued combat capability of the ship. Grade B items are items whose operation is not essential to the safety and combat capability of the ship but which could become a hazard to personnel, to grade A items or to the ship as a whole as a result of exposure to shock.

MIL-S-901 goes even further with its classification of equipment and test items by splitting them into three classes as well.

In short, each of these classes addresses a different mounting application, helping test engineers tailor their assessments based on the eventual location of the shipboard items and equipment being tested.

Did you think we were finished with MIL-S-901 classifications? Think again!

MIL-S-901 divides its test types into three categories as well: Type A, Type B and Type C.

The Type A test, which the specification refers to as the preferred shock test, assesses a principal unit. MIL-S-901 defines principal units as those that are directly supported by the ship’s structure or by a foundation directly attached to it, as well as any items mounted in piping systems, ducting systems and similar systems. These items typically include diesel-generator sets, air conditioning plants, switchboards, radio transmitters, steam generators, missile launchers and valves.

The Type B test assesses the subsidiary components that comprise a principal unit. Examples include the diesel engine of a diesel-generator set, the electric motor of an air conditioning unit or the power supply section of a radio transmitter.

The Type C test assesses the subassemblies that comprise a principal unit or subsidiary component. Examples include thermometers, gauges, meters, relays and resistors.

Photo: Trenton Systems USA-made rugged servers and workstations are currently powering Navy programs and applications today. Our compliance department and test engineers are perfectly capable of meeting your military testing requirements, including those outlined in MIL-S-901D.

Trenton Systems can certify its rugged servers and workstations to MIL-S-901 specifications. In fact, our MIL-S-901D-certified rugged computers are powering Navy programs and applications today.

Our military depends on made-in-USA tech that is designed for harsh testing such as MIL-S-901D.

These systems were the perfect choice for the Navy, which not only required barge testing certifications but the ability to expand their systems with high-speed, PCIe-based components.

Trenton Systems is more than happy to work with our customers on meeting their compliance testing needs. Visit our Testing Standards web page for more compliance testing information, and don’t hesitate to reach out to us if you have any questions.