Photo: In this blog post, we'll go over the differences between PCIe Gen 4 and PCIe Gen 3. We'll also discuss whether it's time for an upgrade.

But whether it’s time to upgrade your hardware to support PCIe Gen 4 is a different matter altogether.

In this blog post, we’ll discuss the speed differences between both generations and address backward and forward compatibility.

Then, we’ll touch on whether upgrading is right for you.

You can read more about PCI Express, how it works and its previous generations below, or you can skip right to the speed differences between PCIe 4.0 and PCIe 3.0. 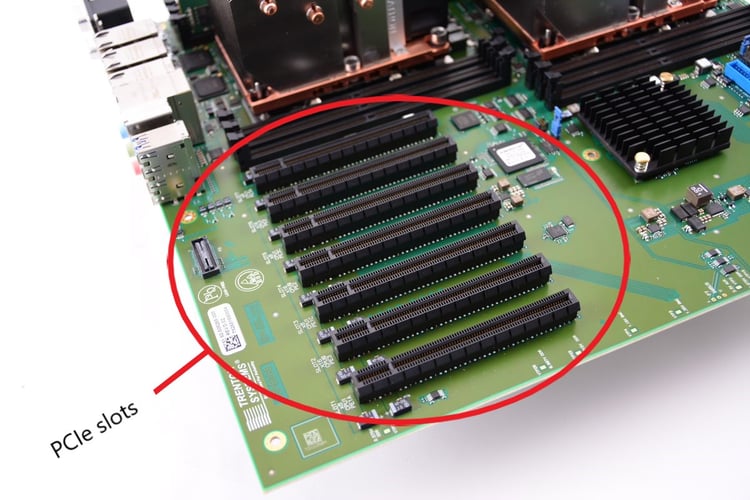 Photo: Seven PCIe slots showcased on a Trenton Systems' dual Xeon Motherboard. This particular motherboard incorporates three PCIe 3.0 x16 slots and four PCIe 3.0 x8 slots for super fast speeds and versatile system expansion. At Trenton Systems, we design our own boards to fit your application-specific needs. Get in touch with us today.

What is PCI Express?

Simply put, the PCI Express interface allows for the expansion of a motherboard beyond its default GPU, network and storage configurations.

The PCI Express interface is actualized through PCIe slots, which vary in type depending on a motherboard's chipset.

The slots differ in both length and speed based on their number of lanes (at a minimum, one lane, and at a maximum, 16 lanes).

For example, PCIe 3.0 x4 refers to a Gen 3 expansion card or slot with a four-lane configuration.

Likewise, PCIe 4.0 x16 refers to a Gen 4 expansion card or slot with a 16-lane configuration.

Each new PCI Express generation doubles the amount of bandwidth each slot configuration can support. That's why the configurations are expressed in multiples of two.

Table: PCI-SIG introduced the first generation of PCI Express in 2003. With each new generation comes a doubling of data transfer rate and total bandwidth per lane configuration, the latter of which is expressed in both unidirectional and bidirectional measurements, depending on the source. To find the total unidirectional bandwidth for each lane configuration, simply multiply the x1 bandwidths listed in the table above by two, four, eight or 16. Multiply the number resulting from that calculation by two to calculate total bidirectional bandwidth. Source: PCI-SIG

It’s important to note as well that these lane-specific bandwidths are often doubled to account for bidirectional travel, or data traveling to and from each lane.

Furthermore, each new generation of PCIe typically doubles its predecessor’s data rate and bandwidth for each configuration.

Today, PCIe 3.0 is a motherboard standard, at least until the industry universally adopts PCIe 4.0 and eventually PCIe 5.0. And by that point, PCI-SIG will have rolled out the next generation, PCIe 6.0, which is expected in 2021.

As with any new technology, it can take computer hardware manufacturers some time to begin standardizing their motherboards with the latest PCI Express generation.

PCIe 4.0 has a 16 GT/s data rate, compared to its predecessor’s 8 GT/s. In addition, each PCIe 4.0 lane configuration supports double the bandwidth of PCIe 3.0, maxing out at 32 GB/s in a 16-lane slot, or 64 GB/s with bidirectional travel considered.

Table: The speed differences between PCIe 4.0 and PCIe 3.0 in each lane configuration.

Let’s use the 16-lane slot configuration to put the speed differences between PCIe 4.0 and 3.0 into perspective and make all this computer lingo a little more relatable.

For the purposes of this analogy, we’ll employ unidirectional bandwidth for both generations.

The cars are traveling at the posted PCIe 3.0 speed limit of 15 miles per hour (bandwidth).

Several miles in the opposite direction, however, the state (PCI-SIG) has just opened the PCIe 4.0 Highway and doubled the speed limit.

The cars on this highway are traveling faster at the newly posted PCIe 4.0 speed limit of 30 miles per hour.

And a couple of years from now, cars will be cruising on the PCIe 5.0 Highway, where they’ll be allowed to travel at a posted speed limit of 60 miles per hour.

And so on with each new PCI Express generation that PCI-SIG introduces.

Are PCIe 4.0 and PCIe 3.0 backward and forward compatible?

Both PCIe 4.0 and PCIe 3.0 are backward and forward compatible.

Remember those high-speed components (GPUs, NVME SSDs, etc.) that use PCIe slots to interface with the motherboard and provide additional functionality?

For example, a PCIe 4.0 graphics card can be inserted into a motherboard’s PCIe 3.0 slot; however, the Gen 4 card’s bandwidth would be bottlenecked by the Gen 3 slot’s bandwidth limitations.

Your expansion card doesn’t have to be installed on a slot with the same number of lanes, either.

For example, a PCIe 4.0 SSD with four lanes can be inserted into a x16 slot.

But the inverse doesn’t work.

In short, the slot into which the expansion card is being inserted must have an equal or greater number of lanes.

Otherwise, the card can’t physically be inserted into the slot. 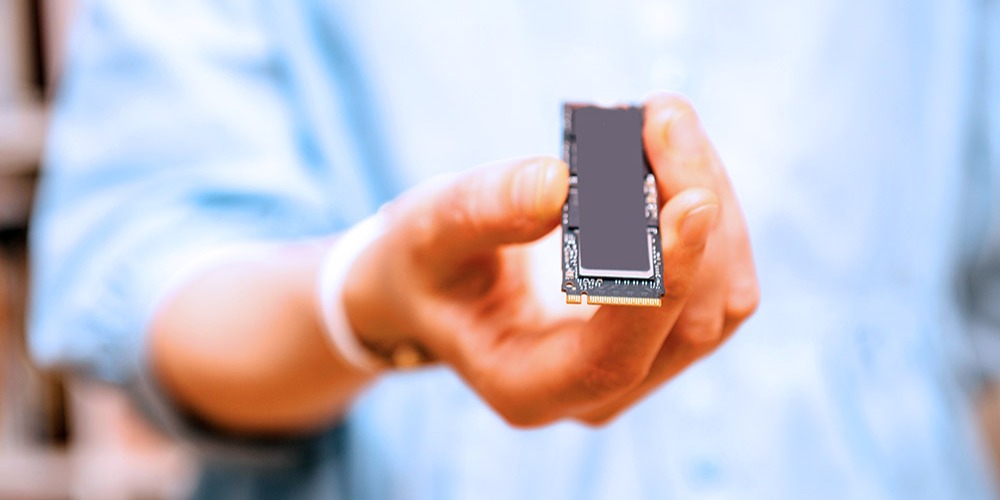 Photo: There are a few things to keep in mind when choosing PCIe 4.0 SSDs and PCIe 4.0 GPUs, mainly the population and PCIe generation of your motherboard's PCIe slots.

How does PCIe 4.0 influence SSD and GPU selection?

As previously mentioned, PCIe 4.0 is backward and forward compatible. So, you can insert a PCIe 4.0 GPU into a PCIe 3.0 slot, but you'll be bottlenecked by the bandwidth limitations of Gen 3. In other words, you won't be able to take full advantage of the increased speeds of that awesome PCIe 4.0 GPU. The same goes for PCIe SSDs, so keep this in mind when you're shopping around.

If you're in the market for a high-speed PCIe 4.0 SSD, such as an PCIe 4.0 NVMe SSD, take comfort in knowing that you'll have the access to the latest and greatest that the PCIe specification has to offer with Gen 4, including increased data transfer rates, bandwidth, and decreased latency on the PCIe bus. This is assuming, of course, that your motherboard is equipped with PCIe Gen 4 slots into which you can insert these PCIe 4.0 SSDs.

There's also widespread use of PCIe 4.0 NVMe SSDs, specifically, mainly because NVMe has become the industry standard for PCIe SSDs, but also because NVMe SSDs reduce power consumption, further reduce latency, and incorporate 1,000,000 input/output operations per second (IOPS) compared to a SATA SSD's 200,000. This offers an obvious performance increase to users shopping around for PCIe 4.0 SSDs.

Otherwise, your PCIe 4.0 GPU will be stuck with previous-generation speeds, and who wants to purchase a new, shiny, expensive PCIe 4.0 GPU without, you know, reaping the benefits of PCIe 4.0?

We're starting to see more and more PCIe 4.0 GPUs pop up on the market, and it's clear that they'll play a pivotal role in streamlining and boosting the performance of data-intensive artificial intelligence (AI) and machine learning (ML) applications of the future. But the last thing you want to do is purchase one for your system and find out it's useless.

Photo: Depending on the data transfer rate and bandwidth needs of your program or application, it may be time to upgrade to PCIe 4.0.

Is upgrading to PCIe 4.0 worth it?

PCIe 4.0 supports double the bandwidth of PCIe 3.0, so if you want to take advantage of the bandwidth capabilities of that PCIe 4.0 expansion card you just purchased, then you’ll need PCIe 4.0 slots on your motherboard.

It’s as simple as that.

But if you’re comfortable with a certain degree of bandwidth limitation and don’t want to spend the money to upgrade to a PCIe 4.0 motherboard, then upgrading to Gen 4 probably won’t be worth it to you.

Plus, if you’re working with PCIe 3.0 expansion cards and slots, anyway, and they’re providing you with the speeds that your application needs, then don’t worry about upgrading to Gen 4.

When deciding whether to upgrade, ask yourself two key questions:

Contact Trenton Systems today or chat with a member of our team to discuss whether upgrading is right for you.

Be sure to subscribe to our blog to keep up with the latest updates.

Trenton Systems creates rugged computer systems to help customers around the world meet their rugged computing needs. We stress-test our computer systems to the max, ensuring that customers can carry out industry-specific operations comfortably, effectively and smack dab in the middle of the world's harshest conditions. In other words, we stress so you don't have to.