What is a LAN Port (Local Area Network)?

Consumer: What in the world is going on with this phone jack on the back of my PC? I've been trying to connect the phone cable to it but with no luck. I've got to get connected today!

Trenton Systems: Hey, no worries! That's actually a LAN port, and you need an Ethernet cable, not a phone cable, to connect to the internet. The phone jack and LAN port are similar in appearance but different in purpose!

Consumer: Oh! Well, that's good to know! Say, do you mind telling me exactly what a LAN port is and how it works? 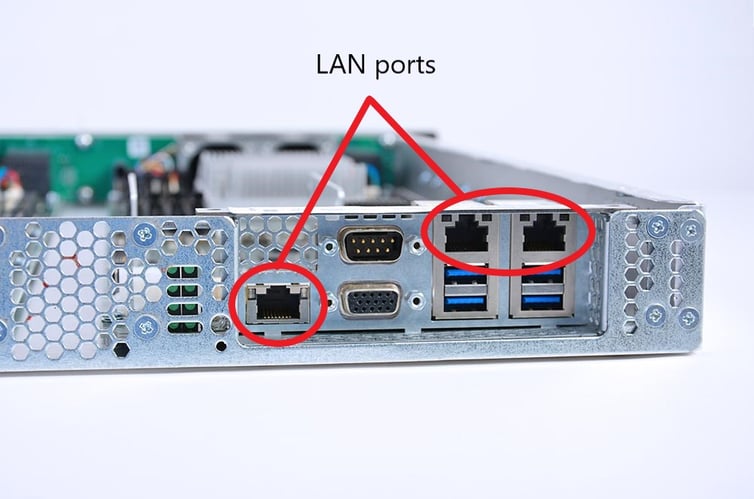 Photo: Three LAN ports on the back of a Trenton Systems 1000 Series Rugged Server. Our standard input/output interface can be customized to fit your specific program or application. You can also try out any of our products free for 45 days.

What is a LAN port?

A LAN port, also known as a network port or network connection, is a socket used to connect computers, servers, video game consoles, and other devices to the internet. They’re typically located on the back of both computers and network devices and are used solely to establish a wired, as opposed to a wireless, internet connection.

What does LAN stand for?

LAN stands for Local Area Network. A LAN is just a collection of devices connected over a short distance, compared to Wide Area Networks (WANs) and Metropolitan Area Networks (MANs), which connect devices located considerable distances from each other.

The term LAN port gets its name from the port's use in LANs, such as home networks, school, and office building networks.

A LAN port is also known as an Ethernet port. Both terms refer to exactly the same socket on computers, servers, modems, Wi-Fi routers, switches, and other network devices.

The term Ethernet port gets its name from the Ethernet protocol, developed by the Institute of Electrical and Electronics Engineers. 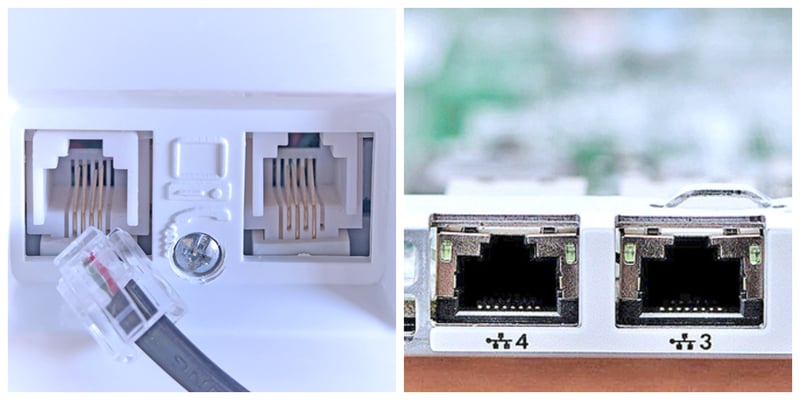 Photo: Comparison of phone jacks (left) and LAN ports. They look very similar, but they each serve a distinct purpose.

LAN ports are about the size of your thumb. They resemble those old landline telephone jacks, but they’re much wider. This is because LAN ports contain eight pins, compared to the phone jack’s four or six.

You could think of the LAN port as the beefy big brother of the telephone jack, but don’t confuse the two, as they each serve a distinct purpose. 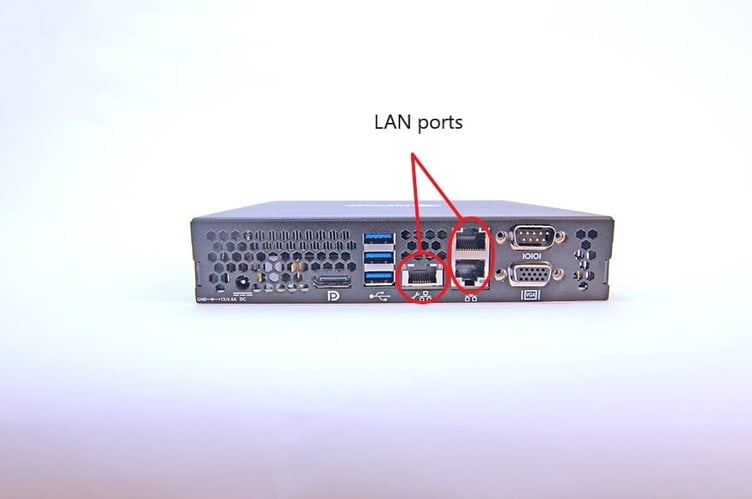 Photo: Three LAN ports on the back of Trenton Systems' ION Mini PC.

Where are LAN ports located? 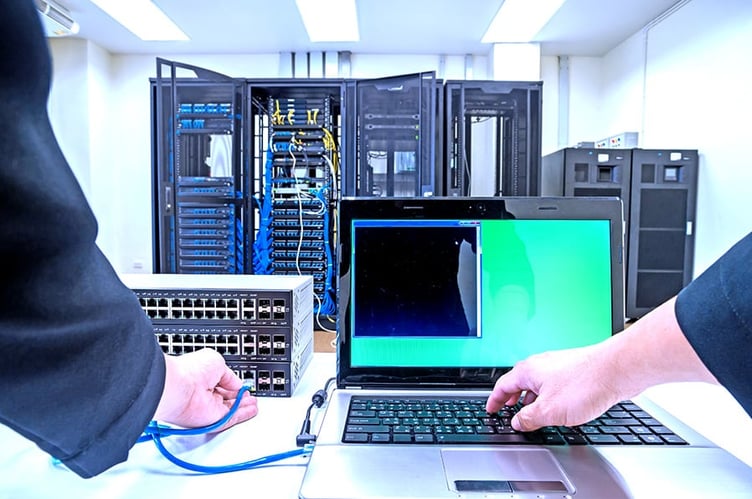 Photo: An Ethernet cable being inserted into a LAN port on a network switch

How does a LAN port work?

For a LAN port to serve its intended purpose, it needs an Ethernet cable and two Ethernet-compatible devices. To establish a connection, plug the Ethernet cable into the LAN port on the device that’s connected to the internet, such as a modem, router, or modem-router combo, and connect the cable to the computer, game console, or other devices at the opposite end. 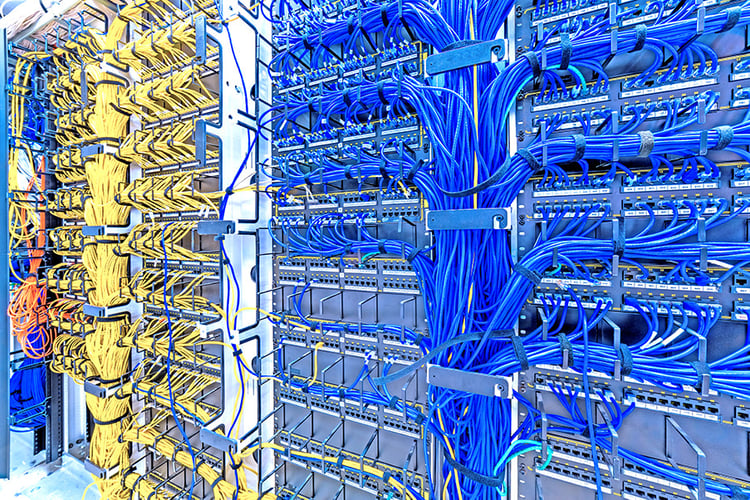 What is a LAN cable?

LAN cables, more often referred to as Ethernet cables, are comprised of copper wiring and come in a few different categories, the most common of which are Cat 5e and Cat 6. The cables terminate with an RJ45, or registered jack 45, connector. The RJ45 connector is just the piece at the end of the Ethernet cable that's inserted into the LAN port.

Fun fact: The RJ45 connector's widespread use in LANs is why the LAN port is sometimes referred to as an RJ45 port or an RJ45 Ethernet socket. Who knew that LAN ports could have so many different names? 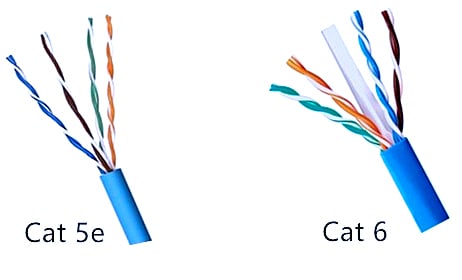 Photo: An internal comparison of Cat 5e and Cat 6 cables. Note the spline at the center of the Cat 6. This piece separates the wire pairs to help reduce crosstalk. Credit: Fiber Optical Networking

Okay, back to cabling. The category of Ethernet cable you use to connect devices will depend on the data transfer rate capabilities of your network. The lower categories, Categories 3-5, support transfer rates of between 10 Mbps and 100 Mbps at a maximum bandwidth of 100 MHz. These have virtually fallen out of use due to advancements in data transfer rate and bandwidth.

Table: Comparison of Cat 5e Ethernet cables and higher. Also note the positive relationship between the cable category, maximum transfer rate, and maximum bandwidth. The higher the data transfer rate, the more data that can be transferred in a given amount of time.

Keep in mind that these cables shouldn’t exceed 100 meters, or else the data transfer rate will decrease. You can use an internet speed test to determine the data transfer rate of your network, and this will help you choose the right Ethernet cable for your application. Generally, it’s best to go with a Cat 5e cable or newer, as gigabit internet service is becoming more and more commonplace. 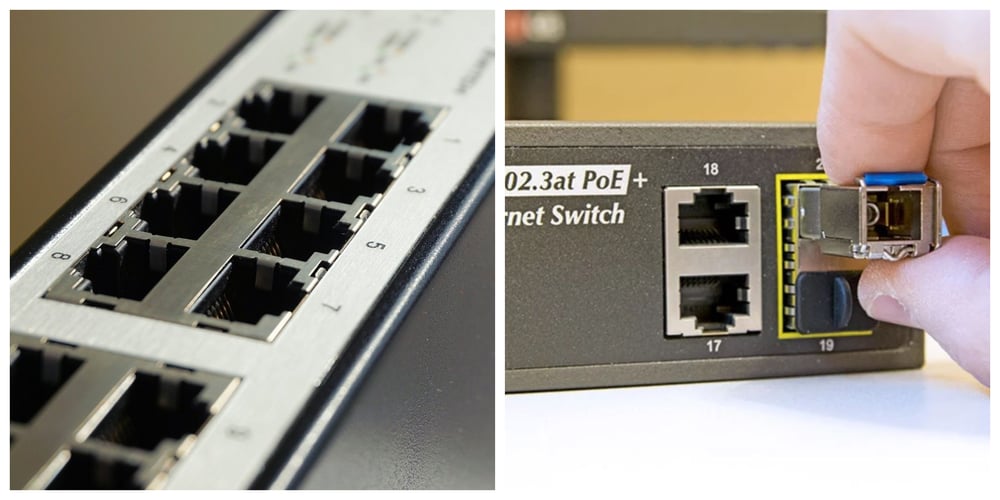 Photo: LAN ports (left) vs. the SFP port and transceiver

How does a LAN port differ from an SFP port?

There are a couple of key differences between LAN ports and SFP ports, both of which are found on computers and network devices.

The most obvious difference is that SFP (small form-factor pluggable) ports require an SFP transceiver to establish a connection, rather than just an Ethernet cable.

Another difference is distance. Due to their copper wiring, Ethernet cables can only extend so far before performance decline occurs. An SFP port, on the other hand, allows for the use of fiber optic cables, which can extend further without experiencing a significant decline in data transfer rate. 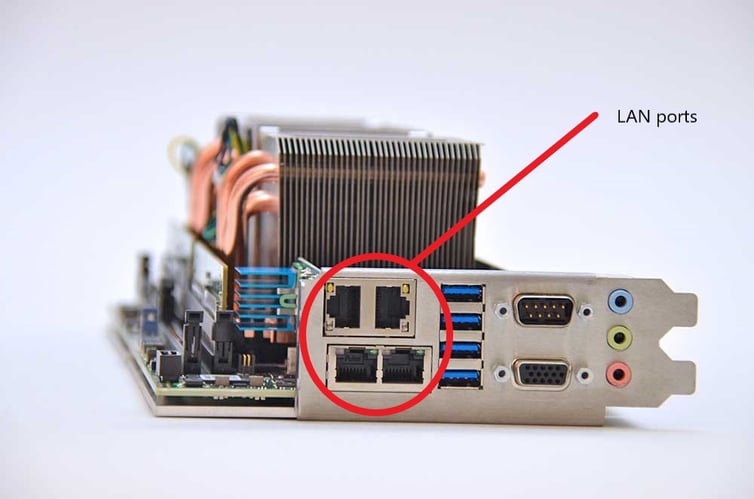 Which Trenton products include a LAN port?

Trenton Systems’ rugged servers, from the 1,000 to the 5,000 series, are equipped with two 1GbE and two 10Gbe LAN ports, as well as IPMI (Intelligent Platform Management Interface) to ensure protection of the ports.

They stand for 1 Gigabit Ethernet and 10 Gigabit Ethernet, respectively. This just means that your Trenton rugged server has LAN ports that support data transfer rates of between 1 Gbps and 10 Gbps, perfect for most modern network applications.

Visit our Components Page for more information about the input/output capabilities of our products.

Consumer: Well, it looks like my mini PC is connected to the internet now. Thanks again for the help, Trenton Systems!

Trenton Systems: You're welcome! Say, how about we make you a customer? Contact us today!

Trenton Systems creates rugged computer systems to help customers around the world meet their rugged computing needs. We stress-test our computer systems to the max, ensuring that customers can carry out industry-specific operations comfortably, effectively and smack dab in the middle of the world's harshest conditions. In other words, we stress so you don't have to.