What Is a Rugged Mini PC?

Photo: Rugged mini PCs are durable, reliable, small-form-factor computers. This rugged, high-powered, small-form-factor PC is the perfect solution to the ever-increasing needs of your resource-intensive applications, especially if they're operating in space-limited environments.

NOTE: Thinking about incorporating a rugged mini PC into your program or application? If so, also check out "5 Things to Consider When Choosing a Rugged Mini PC" and "Rugged Mini PC vs. Rugged Laptop: Which Is Right for You?" to learn more about your options.

Rugged mini PCs have exploded in popularity in recent years due to their affordability, durability, size, and simplicity.

Included among this ruggedized assortment of small computers are powerhouse workstations like the Trenton Systems ION Rugged Mini PC, released to the world in early 2020.

These small, ruggedized computers are ideal for resource-intensive military, industrial, and commercial applications, or environments in which conditions are extreme, weight is a concern, or space is limited, such as on a submarine, on a plane, or in a crowded desert outpost.

You're probably wondering how these small-form-factor PCs can benefit your program or application.

And that’s just what some programs and applications need in a rugged computer.

What is a rugged mini PC?

A rugged mini PC is a small, durable, lightweight, personal computer that has undergone stress testing or ruggedization for usage in extreme conditions and environments.

They weigh significantly less than a full-sized rugged server or workstation and take up a lot less space, making them ideal for nooks, crannies, or other areas where leftover space could be utilized.

Rugged mini PCs can function in all sorts of extreme conditions, including in areas where temperatures are severe or damage caused by vibrations and mechanical shock are a concern.

At the consumer level, mini PCs are usually reserved for tasks that don’t require a ton of processing power, such as web browsing, emailing, and word or spreadsheet processing.

But in the rugged computing industry, a high-performance, heavy-duty, rugged mini PC allows programs or application to handle, and endure, a lot more. The Trenton Systems ION Rugged Mini PC is just one example of such a computer.

And as with any rugged computer on the market, some rugged mini PCs are bulkier, wider, more powerful, and contain more storage capacity than others.

Photo: A rear view of a rugged mini PC that has had its lid removed.

How does a rugged mini PC work?

Rugged mini PCs work like most other computers. They’re just smaller, fit for use in extreme conditions and environments, and generally have limited room for expansion.

And just because a rugged mini PC is a lightweight, small-form-factor PC doesn't mean your program or application has to do without the features it requires.

In addition, rugged mini PCs also typically include the latest and greatest high-performance processors, including the latest Intel Core i3, i5, and i7 processors.

Furthermore, rugged mini PCs consume less power than a full-sized rugged server or workstation, and are also available with or without fans. 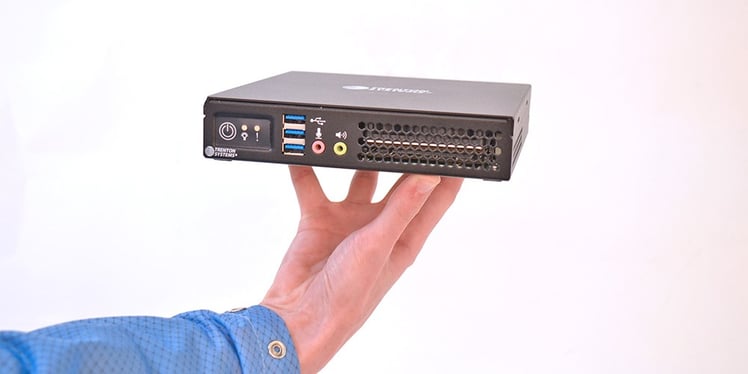 Photo: Rugged mini PCs can usually fit in the palm of your hand. This one's easily balanced on the model's fingertips.

What are some examples of a rugged mini PC?

Several rugged computer manufacturers have a rugged mini PC on the market.

The ION Rugged Mini PC, for example, boasts lightning-fast performance, affordability, durability, an incredibly long life, a customizable BIOS, revision control, an industry-leading 5-year warranty, and free limited lifetime support. You can even try it out free for 45 days.

Where else can you get all those benefits in a small rugged computer?

Here’s an overview of the ION Rugged Mini PC's specifications:

Other examples of rugged mini computers include the SuperServer E200-8D by SuperMicro. Here are the specifications:

Yet another example of a rugged mini PC is the OnLogic Industrial Intel Coffee Lake Mini-ITX Computer (MC510-50). Check out these specifications:

Photo: A rugged mini PC with its lid removed.

What are the advantages of a rugged mini PC?

There are four primary advantages of equipping your program or application with a rugged mini PC: affordability, durability, small form factor, and simplicity.

Photo: A rugged mini PC situated inside a Thermotron environmental testing chamber, where it will undergo rigorous stress testing to ensure durability and reliability in the field.

Is a rugged mini PC worth buying?

Rugged mini PCs make for the perfect military or industrial mini PC, but there are several factors to consider before purchasing the right rugged mini PC for your program or application.

Given the computer's small-form-factor motherboard, most can’t physically support a ton of PCIe slots, which limits opportunities for GPU, storage, and network expansion.

Thankfully, rugged mini PCs are configurable to your needs upon purchase, and should you, for instance, desire more storage capacity, hard disk drives (HDDs) or solid-state drives (SSDs) are easily replaceable thanks to the rugged mini PC's size and simplicity. You could also consider external USB storage options.

Now, if you need something small and lightweight, but you still require the ability to expand later, check out our 1U rugged servers and PCIe expansion kits. 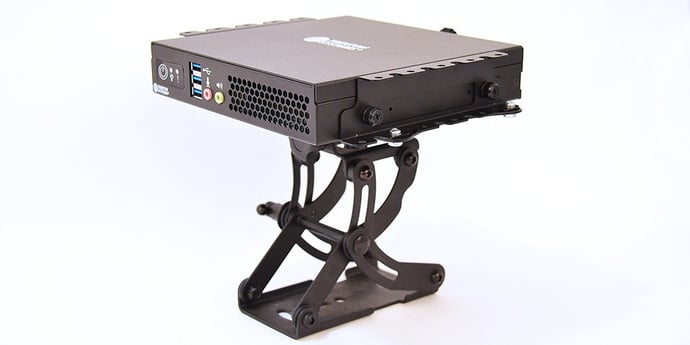 Photo: A rugged mini PC supported by a VESA mount.

If you need a military or industrial PC that's super-small, lightweight, durable, equipped with the latest-generation Intel Core processors, and decked out with plenty of RAM and ultra-fast NVME storage, consider a rugged mini PC, perfect for those demanding military, industrial, or commercial applications that require speed, durability, reliability, and impressive performance in a small but sturdy package.

Check out our other ION Rugged Mini PC blog post to learn more about how Trenton Systems is solving an industry-wide need with its first rugged mini PC.

Oh, and did we mention that Trenton Systems' rugged mini PCs are proudly made in the USA?

Trenton Systems would like to thank the following publications for featuring the rugged ION Mini PC: