Graphic: Edge servers are at the epicenter of today's race to dominate the battlespace. Their usage at the tactical edge comes with numerous benefits that help the military accomplish this goal faster and more efficiently than its adversaries.

If you’ve been keeping up with military computing trends for the past three years or so, the concepts of cloud computing and edge computing have likely remained in your line of sight.

The United States Department of Defense (DoD) is leading multiple cloud computing endeavors, a portion of which involves migrating the computational power of the cloud data center to the tactical edge – that is, the place where combat, reconnaissance missions, and key decision-making are taking place.

But what exactly is the DoD aiming to accomplish by deploying tactical edge computing technologies?

In short, the Department is creating a unified, interconnected, situationally aware ecosystem – frequently referred to as the "internet of military things" or the "internet of battlefield things" - of proximal warfighters, commanding officers, aircrew, and other critical servicemembers across the branches of the military, further enabling the swift transfer of critical combat and mission data between each. This tactical edge collaboration provides the military with the geographical and computational wherewithal to take control of today’s increasingly data-driven battlespace, and keep adversaries deploying these same edge technologies at bay.

In this blog post, we’ll discuss why tactical edge servers are at the epicenter of future military edge computing applications, the benefits they offer, and present some use cases. At the end, we’ll tell you why you should put your trust in one of the leading, trusted tactical edge server manufacturers: Trenton Systems.

What is a tactical edge server?

A tactical edge server is a military computer deployed within the battlespace at or near sources of data-generating clients and devices. Tactical edge servers are almost always rugged or ultra-rugged, conforming to military and industrial standards, such as MIL-STD-810, DO-160, and MIL-S-901, depending on the conditions of the environment in which they’re deployed, and may include sealed chassis and conformal-coated motherboards.

These field-ready, true-grit edge servers can be installed on the battlefield quickly – in transit cases, forward operating bases (FOBs), ground control stations, and tactical cloudlets near data-capturing ground vehicles, aircraft, ships, and other sea vessels – all the while being utilized by troops and other key military personnel in the area.

Tactical edge servers send and receive enormous amounts of battlespace data collected by a variety of edge devices, mainly sensors, installed on unmanned aerial vehicles (UAVs), tanks and other military ground vehicles, and even on soldiers themselves.

The purpose of deploying tactical edge servers is simple: decentralize the processing power of the cloud data centers that military servicemembers rely on for computation. Just like other major businesses and organizations, the military also relies on far-flung data centers for computation and storage, but thanks to the tactical edge, this is changing, and for the better. 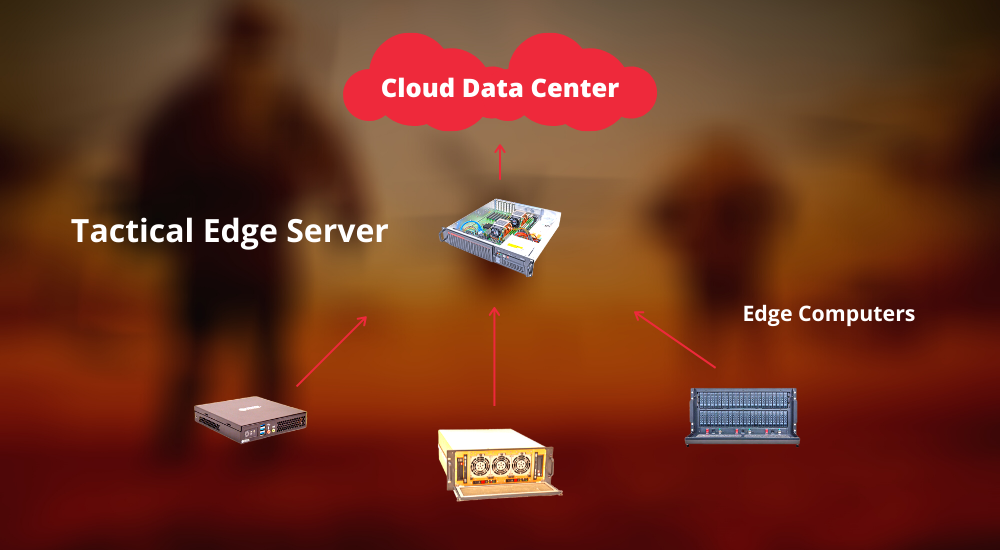 What are the benefits of deploying a tactical edge server?

The military sector greatly benefits from edge devices, like tactical edge servers, that can also function in harsh environments and climates. We call this tactical edge computing. The military can leverage this technology to provide troops in field with the fastest response times and reduced latency, even though they aren’t at HQ. This ensures that you have a protracted computational infrastructure for defense, no matter where the mission takes you. Now, your remote team can phone home in no time and acquire much-needed insight in real time.

So, we’ve addressed the technical reason as to why tactical edge servers are deployed: to decentralize the computational power of a cloud data center used by the military. But what real benefits do these edge networks offer?

There are four main benefits to deploying servers at the tactical edge: 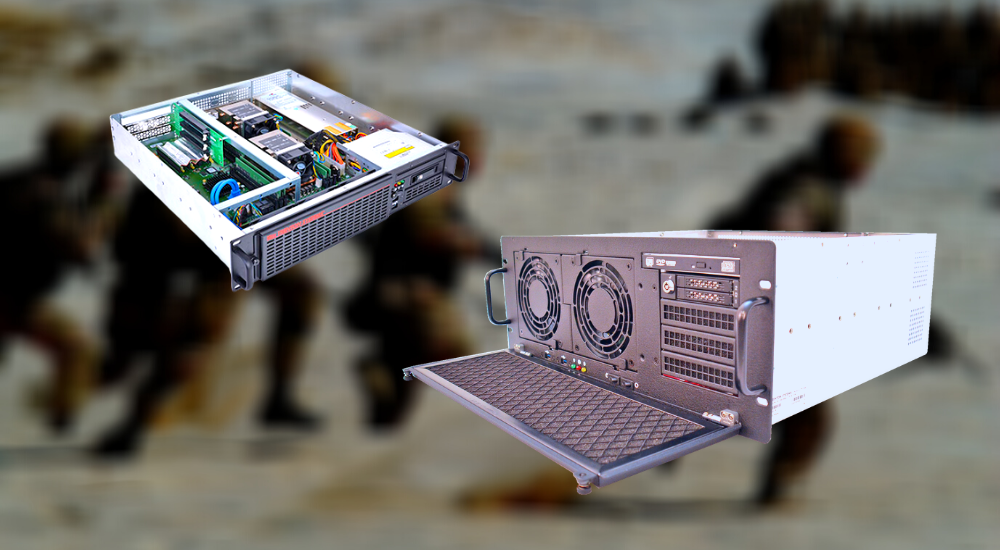 Graphic: There are five defining features that comprise any worthwhile tactical edge server.

What are the defining features of a tactical edge server?

Some interesting trends in edge computing are geared towards the ruggedization of said edge devices. To successfully function in the field, the edge computer must be ready to tackle the environmental impacts first, then be ready to solve the task at hand faster, reliably, and for years to come. Here at Trenton Systems, rugged edge servers that will eventually be installed near, for example, unmanned aerial vehicles (UAVs), manned aircraft, tanks, armored vehicles, and other combat and reconnaissance assets, are being manufactured.

Ruggedizing tactical edge servers involves a few different manufacturing activities, depending on the specific program or application in or for which the server is being deployed. Mechanical shock and vibration testing in accordance with MIL-STD-810 is standard, given the frequent transportation of these systems and their situation in or near combat-heavy environments. The servers may also be temperature-tested to MIL-STD-810 for either end of the temperature spectrum - sub-zero temperatures for freezing environments, extremely high temperatures for dry, arid, sunlight-heavy environments, and even rapid fluctuations between each. High humidity is also a consideration. For further resistance to nature’s elements, chassis may also be sealed, and motherboards may also receive conformal coatings.

Optimizing the size, weight, and power (SWaP) of tactical edge servers is essential to ensure ease of transportability and scalability. The faster these servers can be deployed, the better. The less amount of space these servers take up, the more space available for other servers and devices. The "P" in SWaP may refer to either the power of the CPUs or power supply unit (PSU) wattage. For either case, there's a general focus on achieving adequate processing power and ensuring adequate wattage with which to handle the server's computational tasks. Cost (C) is all-encompassing: reduce costs as much as possible across the board, but don't sacrifice performance. The "C" may also refer to cooling, in which case the focus is on implementing fans or liquid cooling that prevent component overheating, and in turn, server failure.

Overall, with regard to SWaP-C, the general focus for military programs and applications is achieving a small-form-factor, lightweight tactical edge server with considerable compute power, adequate wattage, and adequate cooling, all at the lowest possible cost.

Skimping on CPUs and RAM won’t win the race to dominate the battlespace. High-performance server motherboard CPUs, particularly Intel’s line of Xeon Scalable processors, and high-transfer-rate DDR4 RAM modules give your tactical edge server the brain power and short-term memory necessary to handle all those data-generating clients and devices in the field. If you’re running a lot of applications in real time, you’ll generally need more RAM to ensure performance consistency and prevent buffering or lag. Better CPUs improves the speed and efficiency at which these applications can operate.

Keep this short-and-simple quote by Intel in mind: “

More RAM is like a bigger workbench. A faster processor is similar to inviting a friend over to help you with your work.

Also, check out our Giant List of Intel’s Advanced Technologies, and always refer to Intel’s Product Specifications Database to ensure that your chosen CPUs have the advanced technologies you're looking for. You won't have to worry with that too much at Trenton Systems, as we take great in ensuring you have everything you need with regard to both CPUs and RAM.

To learn more about choosing between Xeon and Core CPUs for your server motherboard, check out Xeon vs. Core Processors: Choosing the Right Intel CPUs for Your Server Motherboard.

Don’t get so caught up in how quickly and efficiently your applications run while neglecting to provide adequate secondary storage in the form of high-capacity solid-state drives (SSDs) and hard disk drives (HDDs), particularly properly authenticated self-encrypting drives (SEDs) if you’re looking for a security boost as well. All that data generated in the field resides in RAM and will be lost the moment your system loses power; ergo, it’s important to ensure that you have enough secondary storage to save your most important data for future access. Nothing’s worse than realizing you don’t have enough drive capacity.

Maxing out the tactical edge server’s CPUs, GPUs, and RAM based on how the system will operate in the field is crucial to ensuring that the server doesn’t fail when you need it most. Computer stress testing assesses how the system responds to immense workloads, validating its operability, recoverability, and endurance when it’s exposed to lots of data generated from multiple applications running at once. There’s lots of software for computer stress testing, which we talk about in our Huge List of Computer Stress Test Software.

Cybersecurity may be the fifth defining feature of a tactical edge server, but it’s far from the least important. Operating system hardening – think Star Lab’s Titanium Security Suite – as well as hardware-based full disk encryption coupled with appropriate management solutions – think properly authenticated FIPS 140-2 storage drives coupled with FUTURA Cyber’s Drive Security Manager (DSM) – are just two of many important cybersecurity considerations for tactical edge servers. Without these and other standard protections like TPM 2.0, all that real-time data is exposed and ripe for adversarial access. 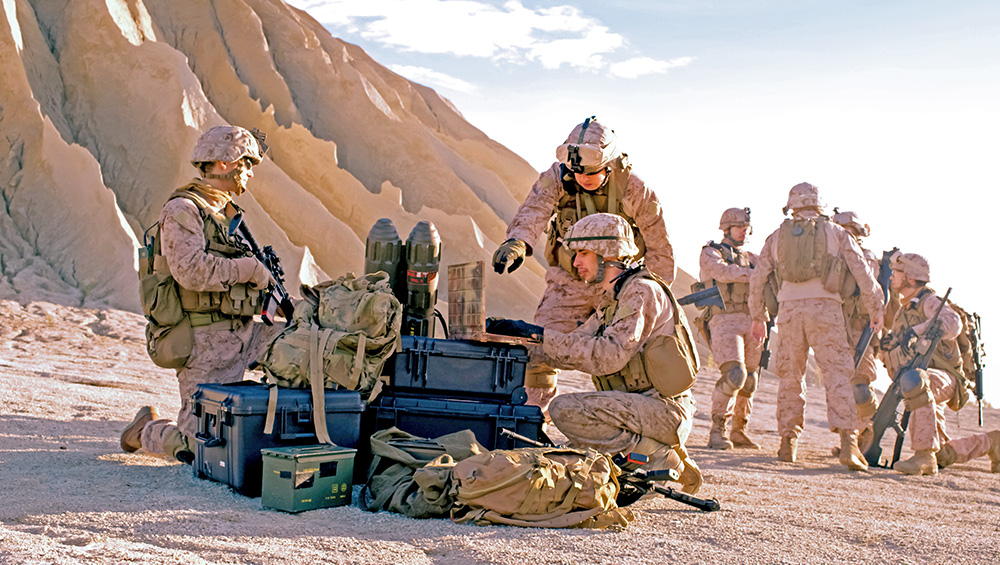 Photo: Transit case deployments are just one use case for tactical edge servers.

What are some tactical edge server use cases?

So, we’ve discussed what makes a tactical edge server and why they’re important for military programs and applications, but how are they actualized in the field?

For more edge computing use cases, check out What Is Edge Computing [With Examples].

Tactical edge servers are, and will continue to be, at the epicenter of the military’s tactical edge computing endeavors, especially as the DoD develops the JEDI Cloud, the cutting-edge enterprise cloud that will offer tactical edge capabilities to empower troops in the field.

Trenton Systems has already deployed custom and commercial off-the-shelf edge servers. We also strongly adhere to the six defining features of a worthwhile tactical edge server. Let us know how we can serve your military program or application today.